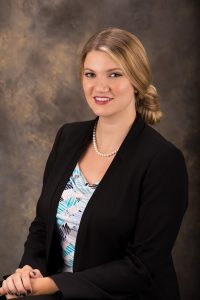 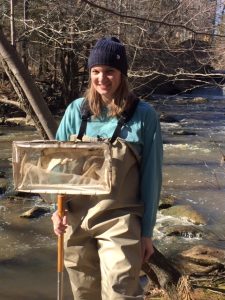 Sarah Orr.  Sarah is working on her PhD in Toxicology. Sarah grew up in Dawsonville, Georgia and graduated with her B.S. in Biology from the University of North Georgia and M.S. in Biomedical Sciences from Mercer University. She moved to Raleigh, NC and joined the Buchwalter lab in 2018. Sarah’s current research interests include elucidating the physiological effects of temperature and salinity on aquatic insects. Her future goal is to pursue an academic career in environmental toxicology. When she is not working in lab, you can find Sarah spending time by the pool with her friends, going to live music shows, or trying new restaurants and breweries in Raleigh.

This work won first prize for sydent presentations at the 2020 SICB meeting in Austin TX! 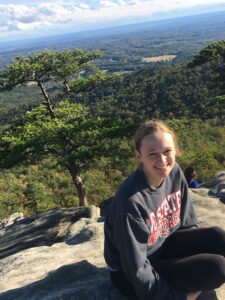 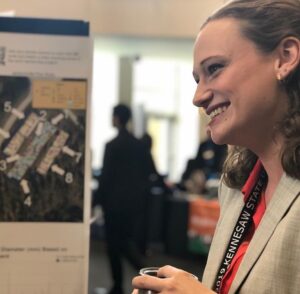 Jamie Cochran. Jamie is working on her PhD in Biology after working in the lab as an undergraduate student.

Jamie grew up in Greensboro, NC and graduated with her B.S. in Environmental Technology & Management from NC State in May 2020. She’s been part of the Buchwalter lab since 2018. Jamie’s current research interests include the physiological effects of hypoxia and salinity on aquatic insects. Her future goal is to pursue an academic career in ecotoxicology. When she is not working in lab, you can find Jamie hiking with friends and family, scouring local thrift stores, or spending time with her cat, Oliver.

Shane Scheibener, MS student, Zoology (2015 -2017). Shane joined the lab as an undergraduate and has stayed on as a research technician. As a MS student, Shane has contributed greatly to our understanding of trace element release from coal fly ash and insect osmoregulation. Shane is now working on his PhD in Norway!

Caitrin Martin, MS. Toxicology. 2007 – Caitrin is working at the US Department of Agriculture  after serving as a Peace Corps Volunteer in Senegal.